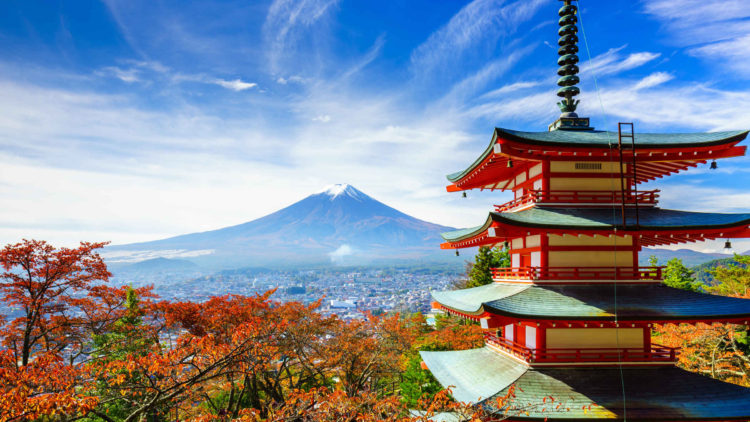 Japan seems like a dream to many as the place is known to us through the magical reels of Studio Ghibli creations and Manga comics. Rich in its culture and heritage, this relatively small Asian country boasts a fascinating list of historical attractions to offer its tourists. Discover the best places in Japan with this specially curated list to make the most of your stay in the country.

Whenever the word Japan crosses our minds, the name ‘Mount Fuji’ pops up instantly; The majestic, most recognizable spot in Japan. Mount Fuji commonly known as Fuji San is Japan’s highest mountain peak at 3776 meters. It is an active volcano located about 100 kilometres southwest of Tokyo. Mount Fuji has not only been celebrated in art and literature, it is now considered as one of the three sacred mountains in Japan. Mt. Fuji is climbed by millions of pilgrims every year and is recognised as one of the most significant icons by UNESCO in 2013. Its exceptionally symmetrical snow-capped cone makes it one of the most beautiful place of scenic beauty.

After the horrific nuclear attack of August, 1945, Hiroshima has evidently become the everlasting symbol of utmost peace ever since, withstanding the devastating attack, and memorializing the victims with incredible effort. Right at the epicenter of the atomic blast, the Hiroshima Peace Memorial Park stands straight holding onto the memories and significant events of the fateful day along with museums, monuments, memorials relating to the tragedy. The park is surrounded by gardens with cherry blossoms that give you a sense of tranquility amidst the chaos of outside world. The park includes the Peace Memorial Park that exhibits the ruins of the tragedy of 1945 along with Atom Bomb Dome and a few other things concerning world peace.

The small town of Nikko is considered as the quintessential destination of Japan. The place has abundant temples that gives you a look inside the ancient Japanese history. The town’s main attraction is the Toshogu Shrine, which is stunningly designed with intricately carved wood with a touch of Buddhist and Shinto traditions. Another attraction of the place is the Rinnoji Temple, which represents the ‘three divine manifestations of Nikko’- the Horse Headed Buddha, the Amida Buddha and the Thousand Headed Buddha. The town of Nikko is the perfect place to dig into Japanese history and tradition.

People are usually drawn towards Japan not because of its ancient history but for its modern culture. Japan is like a dreamland for the art enthusiast, be it literature or movies or art, Japan has a great impact on art in its entirety. The Manga Museum is one of the destinations that cannot be missed if someone is in Japan. The museum contains over 300,000 instancesand useful information of the art form about its historical development. One must save an afternoon to visit the museum as it has a huge collection which you can browse freely or sit and read. It also offers demonstrations and classes for visitors to get accustomed and understand the art form in depth. Getting there is hassle free as one needs to head to Karasuma Oike Subway station and walk for about 5 minutes from Kyoto station to reach the museum.

This place is a treat for Studio Ghibli fanatics. Inspired by a Studio Ghibli anime feature, ‘Kiki’s Delivery Service’ the bakery runs by the name Kiki’s Bakery, that can be easily located in Yufuin Floral Market. It has a European touch with cobble-stoned paths, shrubs and tiled floors situated against the serene backdrop of Mount Yufu. The bakery has a cage hanging from the front door with Jiji (the cat from the film) resting in it. Besides the theme, the highlight of the bakery is its array of delicious pastries, croissants and baked goods. It seems like a place straight out of a Ghibli movie which is like a dream come true for many Ghibli Studio fans.

Osaka Castle is one of the most significant destinations in Japan. It was built in 1586 by the Famous Japanese warrior Toyotomi Hideyoshi. It was the largest fortress in the country at that time though it was destroyed and rebuilt a couple of times. The present structure, built in 1931 is the closest to the ancient one that is a five storey, 42 meter tall tower. The castle displays details and history of the castle and the city and the topmost floor offers a stunning view of the sunset. The 61,000 square metres of castle ground contain thirteen important cultural assets of the city including- Ote-mon Gate, Sakura-mon Gate,Ichiban-yagura Turret, Inui-yagura Turret, Rokuban-yagura Turret, Sengan Turret, Tamon Turret, Kinmeisui Well, Kinzo Storehouse, Enshogura Gunpowder Magazine, Three sections of castle wall and Megaliths at the castle including the Octopus stone. Osaka Castle is a significant place in Japanese history that is easily accessible and open to the public. One can reach Osaka Castle in ten minutes by getting on a train from Osakajokoen Station for just 160 yen.

Words fall short to pen down Japan’s beauty in a few lines. Being blessed with breathtaking destinations, one cannot possibly get enough of the place. Japan is a perfect blend of a modern metropolitan with historical monuments and artefacts for one’s cultural enrichment.

The Best Beaches to Visit in Goa During Your Vacation

Places To Visit In Hong Kong